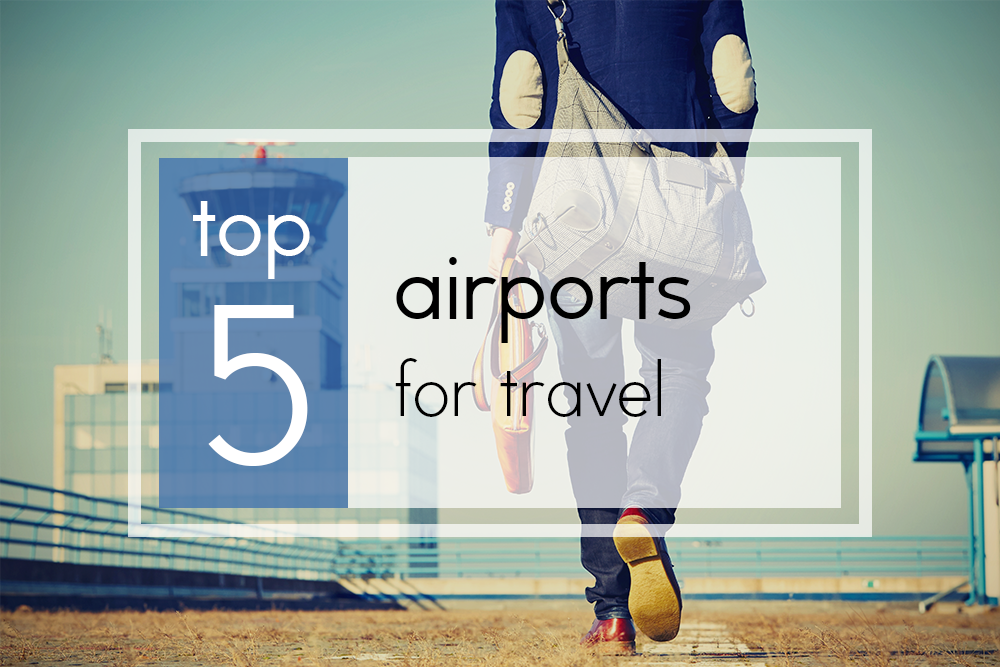 Are you a business traveller who racks up precious frequent flyer miles and communicates at 35,000 feet? We know that the more you travel, the less bothered you become about how good the restaurants and bars are in the terminal or how comfy the seats are at the gate — and that really you’re more concerned with getting in an out as quickly and seamlessly as possible.

Alas dear traveller! It doesn’t have to be like this! Choosing a decent airport can make all the difference to productivity and morale. Whilst no airport is perfect, we reckon we can get pretty close to it! So for your eyes only, here are 5 of some of our favourite worldwide airports to travel through!

What – Having been named the ‘World’s Best Airport’ by GQ and the aviation review company Skytrax, it was only right that Changi Airport was at the top of our list! This airport is one of the largest transportation hubs in Southeast Asia and is one of the busiest with passengers travelling from all over the globe.

Why – Not a lot of people can say that airports are actually fun – but things are different here, with a slide that gets you to your gate! Passengers will also have access to a multiscreen IMAX theatre, a full-sized supermarket and a hotel. The main highlight, however, is the Rain Vortex, a four-storey indoor forest with the tallest indoor waterfall in the world! Spend half an hour doing one of the walking trails or take the Skytrain which weaves through the 900 trees!

Routes – This airport services over 350 destinations worldwide, seeing over 65 million passengers in 2018!

What – This is one of Japan’s two main airports, but this is the quieter (only slightly) of the two and has been ranked as one of the world’s best airports for remote working!

Why – If you have a layover, or make it to the airport a few hours early, Narita Airport offers plenty to keep you occupied. Indulge in fantastic Japanese food or experience some of Japan’s cultural shows, right in the airport! Sometimes you just need to relax and recuperate from all that travelling! The Narita Sky Lounge Wa in Terminal 2 is free to use for anyone (rare we know)! The lounge is complete with comfy seats and reclining sofas! But if you need proper sleep, use Narita Airport’s capsule hotel (9h) for around £11 an hour (which includes a shower)!

Routes – This airport services over 150 destinations worldwide, seeing over 40 million passengers in 2018!

What – Heathrow is London’s main transport hub and is the second busiest airport in the world, but Terminal 5 is the true highlight! Heathrow Terminal 5 Heathrow was ranked the best in the world at the 2019 Skytrax World Airport Awards!

Why –  Hustling through Hathrow is a bit like power-walking through a busy shopping centre! Heathrow is one of the best airports for shoppers, the sheer number of shops is staggering, playing host to big British brands like Mulberry and Paul Smith! There are also lots of nice restaurants, such as Gordon Ramsay’s ‘Plane Food’, which offers the dine in service or a ‘grab and go’ option so you can still enjoy at 35,000 feet!

Routes – This airport services over 180 destinations worldwide, seeing over 80 million passengers in 2018!

What – Schiphol is the main international airport in the Netherlands and is just outside of Amsterdam. It’s also the hub for airlines such as KLM, EasyJet and Vueling!

Why – This airport has recently become the ‘World’s Best Digital Airport’, having invested in a way-finding app – meaning passengers will have no problem navigating the airport and finding wifi. The main pro of this is that it’ll help you find the fastest route to the gate and help you get through security easily! Amongst other things, Schiphol has a library, museum and even a casino!

Routes – This airport services over 150 destinations worldwide, seeing over 68 million passengers in 2018!

What – Dallas/Fort Worth is based in Texas and is the largest hub for American Airlines! In fact, the airport is so big (17 acres) it’s larger than the island of Manhattan and has its own ZIP code!

Why – Whilst power-walking through a terminal while lugging two bags may burn calories, it hardly qualifies as beneficial to one’s well-being. So this airport’s got you covered with it’s own yoga sudio (mats, balls and bands included) to help boost wellbeing and chill you out before you travel! It also offers massage services or if you want to get in those hours, there are workstations for those who want to take care of business.

Routes – This airport services over 250 destinations worldwide, seeing over 69 million passengers in 2018!